State Secretary Lars Vilks was invited to an art exhibition in Tällberg, Sweden. The theme was “Dog”. State secretary decided to contribute to the exhibition with three drawings of the prophet Mohammed as a dog. His drawings were first happily accepted then refused (on the 20th of July). As pictures of the prophet are sensitive matters the event was covered by most Swedish newspapers as well as radio and TV.

The situation has brought back the discussion of freedom of speech and what is acceptable to publish.

Ladonia vice president made this statement:

“In Ladonia freedom of expression is permitted. We do not regulate art, speech, expression, religion or non-religion. The State does not practice censorship. We do not prohibit political life or freedom of association. But we do prohibit violence.

The actual drawings have never been shown. Herald News can here for the first time show one of the refused drawings 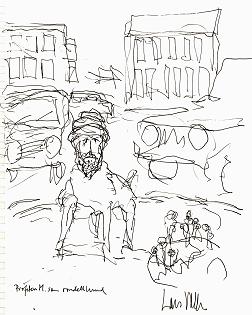 State secretary Lars Vilks: Mohammed as a traffic circle dog (putting small dogs in roundabouts have been widely spread for more than a year all over Sweden).

Interview at the Radio Station